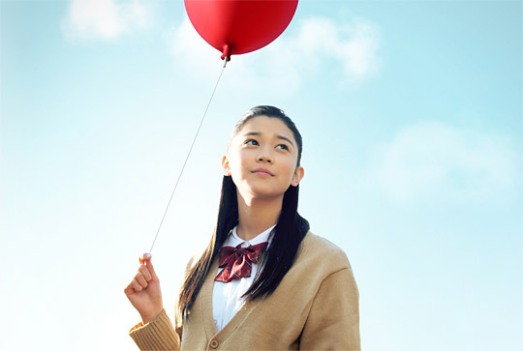 Kariya Yuiko is finally coming out with a new movie :D It’s called Balloon Relay or 「バルーンリレー」 and is coming out sometime this year (hopefully very soon ♥o♥) Looks like a fun movie, but I haven’t been able to find out what it’s about yet. I will update you as soon as I get to know more ;)

Right now I’ve been quite busy with my Japanese studies, so I haven’t had the time to blog that much even though I’ve wanted to. But now I feel the need to express my newfound love for this particular person. 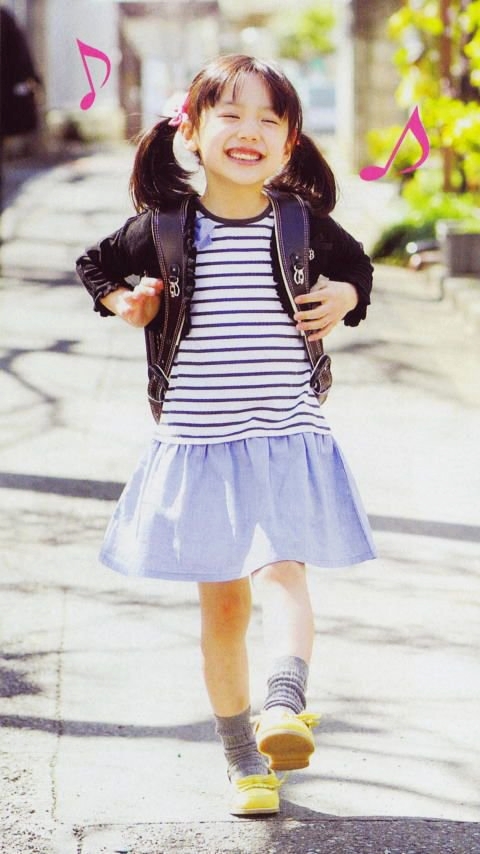 This cute little girl’s name is Ashida Mana (芦田愛菜) ^o^ The first time I came across this 7-year-old girl was in the big hit movie Kokuhaku (Confessions) from last year, where she played the unfortunate daughter who gets murdered by some of her mother’s students. I didn’t get to see 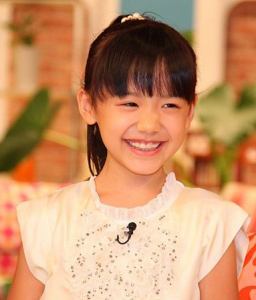 her talent that much in that particular film, though I found her really adorable of course! However, after having watched Kokuhaku I found myself seeing this girl everywhere! She was in TV shows, commercials, drama series and then suddenly also on music videos, as she debuted with the hit song Maru Maru Mori Mori together with co-star Suzuki Fuku (鈴木 福) from the drama Marumo no Okite where they sing the ending theme together to a cute dance. I really liked that song and kind of got addicted to it (even though it’s a children’s song… xD) and started following Mana-chan closer. 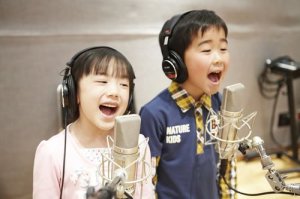 Then out of the blue came a contract with Sony Music for a solo singer career! Unbelievable :O Only 7 years-old and already signing with a music company for a singing career – not to mention a solo singing career (oh my god) o__o  Now I got even more curious about this girl who seemed to have it all: a cute smile, adorable personality, good acting skills, fair dancing skills and even singing skills, just at seven years old! Wuaah~ Almost too much xD and then I still want more… She’s just too cute and I’m a sucker for that, so I can’t stop loving her ^^; 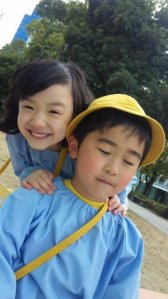 Especially after having begun watching her in the role as Kaoru in the family drama Marumo no Okite I’m getting really hooked on this girl. Fuku-kun is also amazingly cute in the role as her baby twin brother Tomoki and together they just make the cutest little pair of twin siblings I’ve ever seen on television x3 ♥ I can really recommend this drama, as it’s both fun, sad, wacky and touching, which makes it a very memorable piece of work. I also think all the actors do a great job :)
Then I musn’t forget to mention that I’m looking very much forward to Mana-chan’s debut album Happy Smile! releasing the 23rd this month, as I already love the songs Suteki na Nichiyoubi ~Gyu Gyu Good Day!~ and Minna no Happy Birthday which have been released beforehand. The PVs are 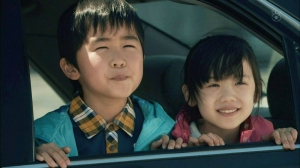 also really great, where Mana does her cute little jumps, smiles and energetic dance moves, where after I’m completely sold xD Haha. Aw, I wish both Ashida Mana and Suzuki Fuku an exciting and amazing career as both of them have that special “something” – that “it” factor – which makes them both so appealing and lovable to people in all ages.
Here are the beforehand mentioned songs sung by Mana-chan and Fuku-kun ^^ 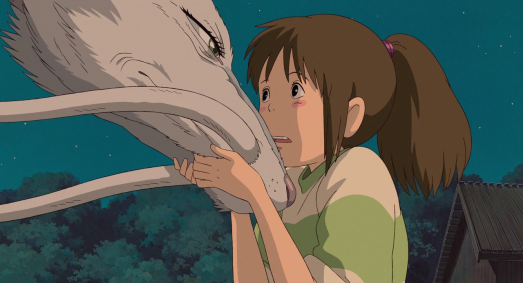 This year – 2011 – it’s exactly ten years since the masterpiece, that is Sen to Chihiro no Kamikakushi, were released in Japanese cinemas. This movie was my very first Studio Ghibli and Miyazaki movie and is actually maybe one of the main reasons I got into Japanese culture. It’s one of my all time favorite movie and I’ve watched it countless times. I don’t know what it is, but I’ve always felt this Ghibli movie was different from the other Ghibli movies. It’s probably more the animation style that’s different. I’m especially thinking about the character designs. Normally Ghibli characters have somewhat larger eyes, don’t they? I also think the characters look more Japanese and are more detailed than usually. This movie is really beautifully animated and I love the traditional Japanese setting, which captivated me immensely back when I watched it for my first time. 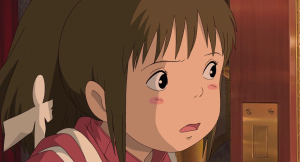 I also find it fascinating that Miyazaki Hayao intended to make a movie for 10-year-old girls, which is normally uninteresting for an older audience, and then it got to reach so many different age groups. Fantastic! :O I like how the movie treats the theme of identity search and how lonely and lost you can feel in that process. I think Chihiro’s a great character, as she’s first a spoiled and lazy girl who has yet to discover her true identity, but then accomplishes through an array of obstacles and various tests throughout the story. We watch her discover both the good and bad traits in the people around her and then her own good qualities which show more and more as the story processes. I think all people can relate to the feeling of being lost when rooming through the dark in the search of your identity and that’s probably why it’s such a good story. Normally kid’s movies focus on things like adventure, magic and maybe your first love interest, when the most important thing for most people that age actually is to search for one’s identity, isn’t it? Miyazaki is good at understanding people like that :) That’s probably also one of the reasons I love this movies so much. Of course they have great animation, but for me the best thing is definitely the stories’ messages. I really think his movies are for people in all ages ^o^ 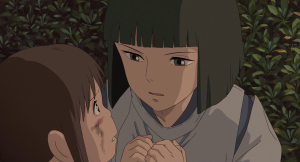 Now back to Sen to Chihiro no Kamikakushi (btw, love the meaning of the title: Sen and the Mysterious Disappearance of Chihiro. It has a nice poetic sound to it hasn’t it?) I need to tell you about my love of Haku xD (Sorry, he was my first anime crush…) I really liked his mysterious intro, where he appeared to recognize Chihiro (but Chihiro didn’t recognize him) and then went out of his way to protect her ♥ Best intro ever!! Really left a big impression on me. I also loved his big green eyes and that funny “prince-like” haircut of his’ :P His seiyuu (Irino Miyuu) voice was also perfect, love how he talks a more formal old-fashioned Japanese which they used to talk at the emperor’s castle :O So cool! And then of course I loved the fact that he was both a dragon, god and a witch’s apprentice ( totally multi-talented! xD ) and also the fact that he was such a gentle and kind person towards Chihiro. I hope they got to meet again, as Haku promised Chihiro they would in the last moment between them in the movie. But it’s nice how Miyazaki made that “open” ending, making it up to the audience’s imagination to decide what will happen afterwards – just genious \(^o^)/ yay 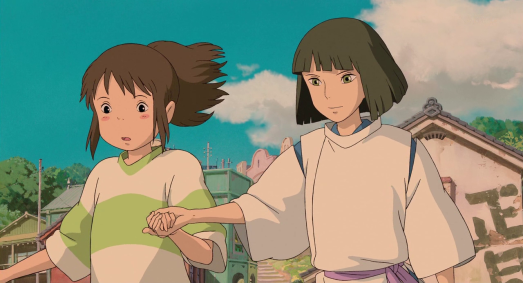 Right now I’m just really wishing for a Blu-ray release from Pony Canyon. They have released like 8 out of 15 Ghibli movies (if you only count their major projects), so it’s about time they release Sen to Chihiro no Kamikakushi >< It’s the movie’s anniversary and all :(  And then I just really want to have the movie in Blu-ray and watch some more extras (would be amazing!) *sigh* I guess I’ll have to wait some more years though ;( I just think this wonderful movie deserves it! xD