The dance moves are simply gorgeous!! And they just look damn cool! X'D

TENSAI : Ninomiya Kazunari Fanlisting
http://nino.rainy-blues.net/
A great Nino fanlisting, for everyone who’s a fan of this wonderful person ^O^ 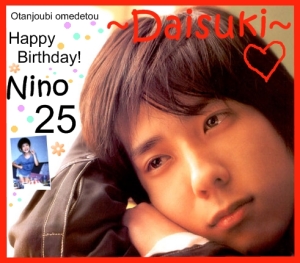 Congratulations on your 25th year! I hope this will be another great year for you :) Daisuki da ~my love~! <3

Here's some interesting facts about Nino, I found on another blog site ^_^ Enjoy!

1.      His five favourite hobbies are music, song writing, self-taught guitar-playing (which he is very famous for…), and watching/playing baseball, of course his games

3.      He appeared in the most TV dramas among his fellow band mates

4.      His least favourite season of the year is summer… which is kinda ironic because they first debuted as a new group in the J-Pop industry in Hawaii on a VERY HOT, RIGID SUMMER…..

5.      He's an overall nice and sensitive guy who cares a lot about the environment and enjoys the wonders of nature.

7.      According to Nino's close chum Sho Sakurai in an interview, he described Nino as an "unpredictable guy who can get VERY spontaneous." He also stated that Nino used to be a funny and talkative guy but ever since their debut and his huge appearances in TV dramas he had become silent somehow. Sho-kun was even worried about Nino as well

8.      Another skill that Nino possesses other than playing the guitar and baseball is his ability to write his own songs. Nino hoped that maybe one of his songs might be produced and released in one of their future singles/album releases along with the rest of the group.

9.      His nickname "Nino" has existed since his first year of elementary school.

10.  Joined JE at the same time with Aiba

11.  During the audition day Nino actually had a baseball GAME (that's why Nino did NOT want to miss this day for baseball).  After auditions he eventually went to his baseball game (which started already of course).

12.  He did not have any passion for performing (singing, dancing, acting, etc.) before he joined Jrs.— he was always a baseball guy.  But he had good abilities in learning everything on his own, therefore he learned all the performing when he was already in Jrs.

13.  The only reason why his parents signed him up to Johnny's behind his back is because they were paranoid for. They feel that Nino was hanging out with the wrong crowd and were afraid that he'll be a "juvenile delinquent" when he gets older. They thought that being in Johnny's would give him a sense of discipline and stability.  They just wanted what's best for their son after all.  None of them (not even Nino himself) expected that he'll end up going all the way to stardom with Arashi once he was in Jrs.

14.  He’s considered a self-centered person from a card reading

16.  After the Nagoya concert, just as everyone got ready to bathe before going to bed, Nino imitated Ohno’s solo concert performance wearing only an underwear, and everyone was cruel enough to refuse to sleep with him

17.  he realised that his left pointer is as long as his middle finger, but it’s not like that on his right hand

18.  he still remembers the Music Station performance in year 1999, October 8th, because they all have to wear those transparent suit while singing, when they sweat, it looks like they’re only wearing underwears singing and dancing on the stage

19.  he had to portray a character which is his total opposite (as he considers)—— a very smart yet cool person in “Abunai no Houkago”

20.  he’s getting closer with Ohno, even during concert MC he kept talking secretly to Ohno behind the rest, this made Kame, who was in front, complain that he was really ‘mad’

21.  during the Nagoya concert when Nino and Ohno are changed and prepared to get on stage again, Nino sang to Ohno in those two nights…. is it a love song?!

22.  Because Nino has serious posture problem, his mom bought him a waistband to help correct this problem, but then his mom didn’t know how to use it, so he too never used it

24.  Loves to play games, he won’t even stop when there’s an earthquake, his longest record is 9 hours

25.  When he watches his own performances, he calls himself ‘Kimura Takuya #2’

28.  in June, he knew that they will debut, got to know that they’re named ‘Arashi’ together with Sho

29.  while they were having 109109 concert, they had to do ‘V no Arashi’ and didn’t have the time to practice their dance steps, Nino was so anxious he felt like crying

31.  There was once while in Jr concert, he said thank you and goodbye to the fans while using the mike he was still in the toilet, didn’t manage to come out in time

32.  Bathing, it’s the first thing he does every morning

33.  he always forgets his things

35.  he usually bathes after he washed his hands

37.  while wearing pants, both legs go in together, cause he sits down to wear them

40.  he got lost in the backstage during his first time in Jrs concert

41.  he once saw a stranger (man) inside the mirror in a hotel, when there isn’t anyone else in the room

42.  while he was in elementary4, there were 9 girls who gave him chocalates. Other than those from his class, there were some girls from the other classes, some were his seniors. That day, he became his boy classmates’ idol

43.  he loved to press other people’s doorbells during elementary days

45.  when he was young, he was forced by his grandad to show the ‘V’ sign while taking pictures

46.  loves to study, he wanted to enter Todai’s Economics studies

48.  Also in "Music Jump" he challanged “tear king”, he had to start crying (as in real tears flowing out) in 1 minute. But he only managed to wet his eyes, that’s it. Imai Tsubasa was laughing at him that he looked that those Manga heroines

49.  people always say he looks like a kind of dog

50.  he can sleep practically anywhere, he tried sleeping by the riverbank for 6 hours

51.  his longest sleeping record was 21 hours

52.  became bald once because of movie shooting

53.  fractured his bones before. Thoughts? Very painful, and the medical bills really hurt

And then my favorite Nino videos!